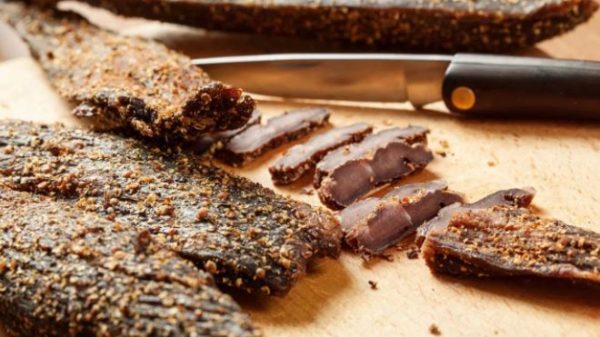 Biltong, dried and cured meat with various spices, is the most popular snack in South Africa. This delicacy is packed with surprising health benefits which many foodies aren’t aware of.

Lean and impressive, biltong has earned a reputation in South Africa as a great pre-workout snack. Even the national rugby team vouches for this iconic treat.

Zinc, a type of metal, is a trace element that’s critical to human health. Although many know zinc for its immune boosting properties and ability to stave off the common cold and certain infections, it also helps to stimulate the activity of dozens of enzymes. Humans only need to consume a small amount each day in order to reap its benefits.

Fat quantities vary according to specific brands of biltong, but unlike many other cured meat, it’s very low in fat. There’s just three percent of fat in an average serving of biltong, it’s packed full of protein and has no added sugar like many workout bars, making it an ideal snack for people on paleo diets or those focused on fitness.

Iron is a critical element involved in several body functions, and a deficiency can cause fatigue, dizziness and an increased heart rate. Biltong is high in iron, and many dieticians recommend increasing intake of foods like biltong when they are struggling with anaemia. Although iron content is present in many red meats, biltong needs no preparation and can be easily eaten on the go.

Biltong is also a good source of vitamin B12, which helps make DNA and red blood cells. Because your body doesn’t make vitamin B12, it can only enter the body via supplements or animal-based foods. Eating biltong as part of a balanced diet can increase the amount of B12 in the body.

Fitness fanatics might know creatine, a powerful amino acid, as a powdered substance that helps to increase the body’s ability to produce energy. Although its use in this form is controversial, creatine is actually naturally present in our bodies and some food items, like biltong.